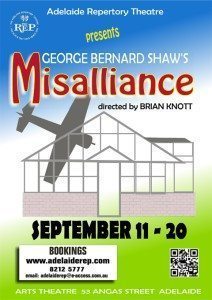 Misalliance is an ironic examination of the mating instincts of a varied group of people.

Synopsis:
Though Hypatia is engaged to a young aristocrat, and has even had a scandalous proposal from her intended’s debonair father, she is restless. She acknowledges that her fiance is clever, and is the most interesting man she’s had a choice of, but she is impatient with his having brains and little else to attract her. She longs for some adventure to drop out of the sky. And drop it does.